Hypoxic ischemic encephalopathy (HIE) is a brain injury that affects 1-6/1000 neonates in the first 2 weeks of life [1]. Radiologists interpret HIE from apparent diffusion coefficient (ADC) maps. Excessively low ADC values indicating restricted water flow warrant the reads of HIE lesions [2]. This interpretation has uncertainties [3]. Uncertainties mainly come from the lack of knowledge about normal variation of ADC values among healthy neonates. Given the lack of knowledge about normal ADC variation, it remains a qualitative and subjective judgment to when and where an ADC value is excessively low [3]. We recently constructed first of its kind normative ADC atlases [4,5] (released at https://www.nitrc.org/projects/mgh_adcatlases). Our atlases quantify normal ADC variations at each brain voxel location in a normative neonatal population. This gave rise to the possibility of machine-assisted, quantitative and objective interpretation of HIE [6]. Herein, we quantitatively compare atlas-based machine interpretation of HIE lesions with the interpretations from two practicing radiologists, in order to test the diagnostic utility of our atlases.

Our evaluation dataset contains ADC maps of 8 HIE neonates, diagnosed and treated in Boston Children's Hospital, scanned on a Siemens 3T scanner with b=1000. Voxel size was 2x2x2mm and each ADC map contained 128x128x58 voxels.

We non-rigidly registered the atlases into the neonatal patient's space [7] to enable voxel-by-voxel comparison between the patient and the normative atlas. After the registration, patient's ADC value Ix at voxel x was converted to a Z value (Zx=(Ix - μx)/σx), which quantified how many standard deviations away this patient's ADC value was from the mean normal ADC value at the corresponding anatomical location. We labeled those voxels as being affected by HIE lesions if they had Z values lower than a threshold t. We measured the accuracy of atlas-based automatic HIE detection as the threshold t varied. The accuracy was defined as the Dice overlap coefficient with manual annotations of HIE-affected regions from the two radiologists (Rater1 and Rater2, each with 7+ years of experience). We report Rater1-vs-Rater2 Dice overlap, and the average of Rater1-vs-Algorithm and Rater2-vs-Algorithm Dice overlap as the algorithm's threshold t varied.

The two radiologists had Dice overlap over 0.5 in 6 out of 8 patients (min 0.59, max 0.89, median 0.82). Figure 1 shows two radiologists' reads of HIE lesions (red and green), and automated results based on thresholding the Z-map at various levels. We further quantitatively compared the inter-rater Dice overlap and algorithm-rater Dice overlaps at various thresholds, for each of the 6 patients (Figure 2) and for all patients combined (Figure 3). As Figure 3 shows, threshold value -1.2 gave an algorithm-rater agreement that was closest to inter-rater agreement.

·Figure 1. HIE detection by two radiologists (Rater 1 and 2) and by atlas-based Z map calculation and thresholding. 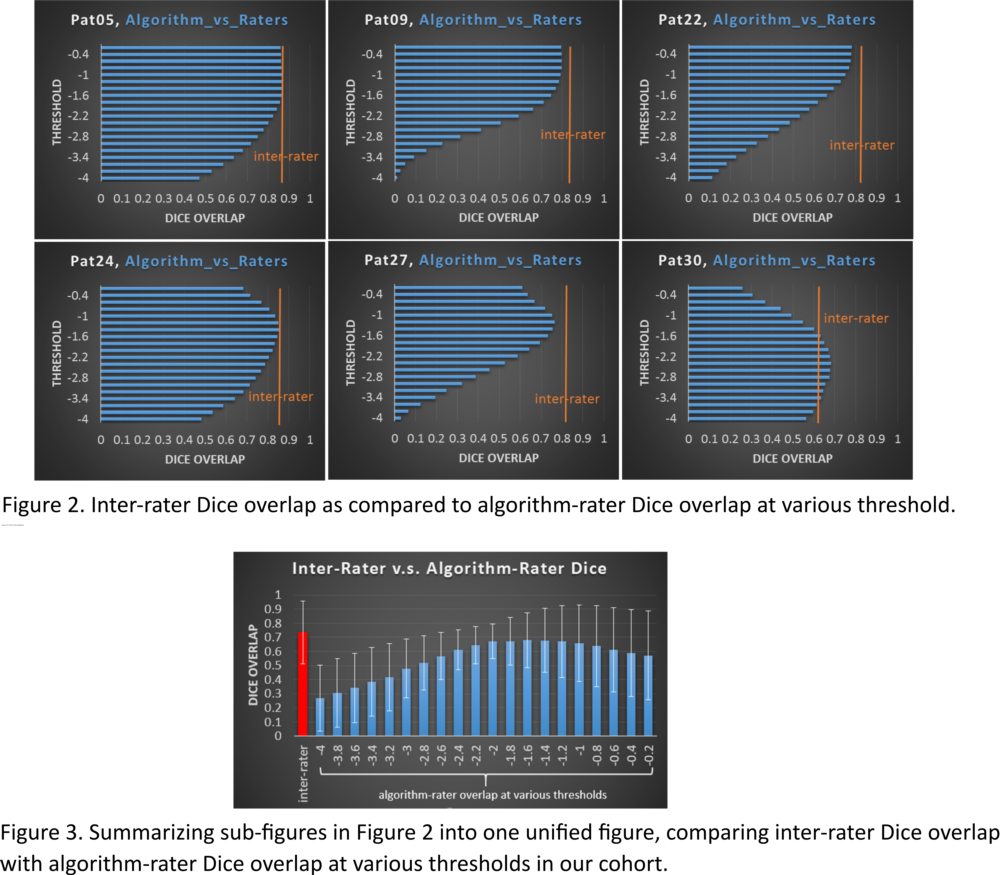 Disorders of the Nervous System:


1|2Indicates the priority used for review

Would you accept an oral presentation if your abstract is selected for an oral session?

I would be willing to discuss my abstract with members of the press should my abstract be marked newsworthy:

Please indicate below if your study was a "resting state" or "task-activation” study.

By submitting your proposal, you grant permission for the Organization for Human Brain Mapping (OHBM) to distribute the presentation in any format, including video, audio print and electronic text through OHBM OnDemand, social media channels or other electronic media and on the OHBM website.

Internal Review Board (IRB) or Animal Use and Care Committee (AUCC) Approval. Please indicate approval below. Please note: Failure to have IRB or AUCC approval, if applicable will lead to automatic rejection of abstract.

Yes, I have IRB or AUCC approval

Please indicate which methods were used in your research:

For human MRI, what field strength scanner do you use?

Which processing packages did you use for your study?